The Hilly Street Food of India

India is synonymous with street food. The food that can be found in roadside shacks and carts is known both for its excellent flavour and also in some cases for its after effects. In fact so widespread are the stories of stomach troubles from food in India that the term “Delhi Belly” is known around the world.

In all fairness eating street food is in equal parts about being adventurous and being stupid. The good part is that the food is prepared right in front of your eyes. Anyone can get food poisoning from any restaurant where you do not witness the food being made, but street food joints don’t hide behind any doors.

As a rule, I have mostly avoided street food. I will have the occasional “chat” from a vendor I have known for years, but visiting a new place, I stay clear from it, no matter how tempting the food might look. Even since I started traveling with my daughter I have become even more cautious and make sure to avoid all street food in new places.

For the slightly more adventurous traveler visiting India, all I can suggest is scan the surroundings of the food vendor. If the place is relatively clean with bare minimum flies, go for it. There are however cleaner “proper” restaurants like Haldirams and Bikanerwala that serve Indian street food in more hygienic surroundings, and they are the ones I personally prefer.

I do recommend that no traveler should ever leave India without trying our “Street Food”. Gol Gappa/Pani Puri, Aalo Chat, Cheela, RajKachori, Pao Bhaji, Chola Bhatura, and to end it all Paan are but a few must haves and essential for any foodie.

Traveling with my family to Mussoorie last week, I decided to stay clear of the street food as usual. What I did do was at least take the following photographs to maybe entice some of you to be a bit more adventurous and give our street food a try; 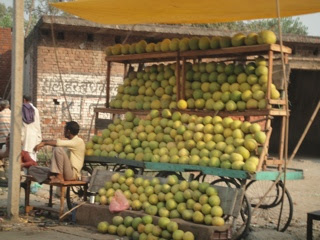 Still not sure what fruit this was, but in size it resembled a melon. We saw a bunch of people selling these on carts like above en route to Mussoorie. 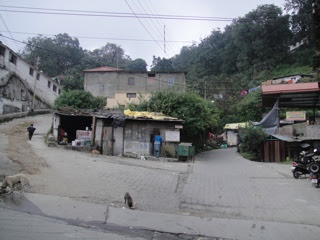 The little tea stall on the left was perfect for a hot masala tea as the temperature dropped close to nightfall in Mussoorie. Unfortunately, although it was right next to our hotel, it lacked basic cleanliness and thus we avoided it. 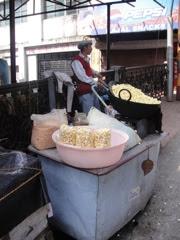 Mussoorie’s Mall Road is its number one tourist attraction. Walking along the Mall I was saddened to see that it still needed better infrastructure, less car/bike traffic, and better cleanliness. Nevertheless, the hot popcorn did look tempting and I might have tried it had it not been for the burning afternoon sun. 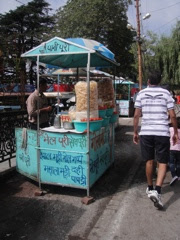 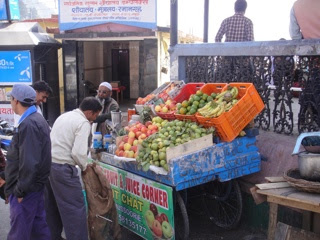 Healthier street food options are always available. A fruit chat for the calorie conscious would add to the workout you get after walking along the Mall Road. Unless, you decided to use a rickshaw as your mode of transport, which I would recommend only for the aged/children/handicapped. 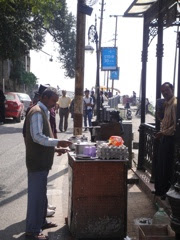 Once again had it not been for the blistering sun I was really tempted to try out some boiled eggs and tea being sold on this makeshift stall alongside the Mall Road. 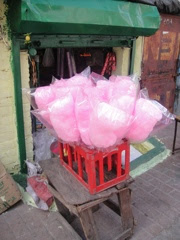 Candy Floss has a much interesting name in India. It’s usually called “Budhiya Ke Bal” which translated means “hair of an old lady”. Now that name might make you think twice before buying it, but then you will be missing out on some delicious pink goodness. 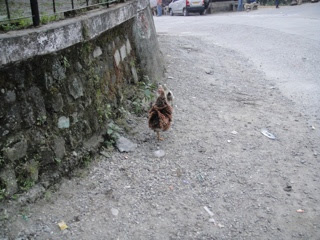 Okay! it’s not street food in the conventional sense, but I am sure that either this poor chap will be eaten at some point or is responsible for producing eggs which we will eventually eat, so technically speaking it is food and it is on the street 🙂 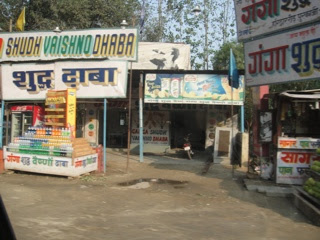 Lastly, on the way back we came across a number of Dhabbas (Roadside Restaurants) that have long been an essential part of any road trip. They are also the main source of food for truck drivers carrying goods around the country, so you are likely to find a number of trucks parked around them as well. Look for a Dhabba with a few cars parked (for safety and also it is a sign that the food is good) and you are guaranteed some yummy Dal (lentils) and a variety of butter laden Paranthas (Indian Bread).