Situated at the far end of Ambience Mall, Gurgaon, Chili’s has a very unceremonious entrance that might even make you miss it were you not looking for it. Nevertheless, it’s not what’s on the outside that matters, but rather what comes out of the depths of their kitchen that does.

Inside, Chili’s is reminiscent of other international chains such as Ruby Tuesday’s and TGIF when it comes to the décor and ambience; each one having a sort of bar and grill concept when it comes to food and drinks. The branch I visited was surprisingly busy on a weekday afternoon and that is always a positive indication of the food they offer, or maybe the drinks, but since I was with the family, drinks were not to make an appearance on our table. Clean and tidy with comfortable seating, because leg space is very important to me, and a child friendly atmosphere the restaurant is welcoming; be it the host or the person providing the service. In fact their friendliness lied just on the right side of being over bearing and annoying, not too intrusive, but at the same time a few visits to either “play” with my one year old son or to ask if everything was in order. These minor intrusions were easily looked over as the service was brilliant, on time, and in fact appreciative when I was recommended the best option for my daughter, the kids menu, which proved to be perfect and to her linking. 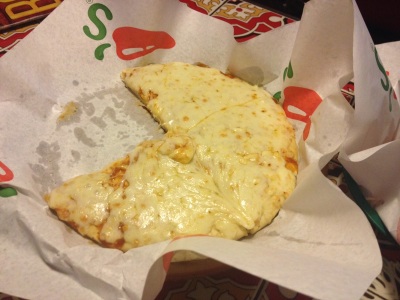 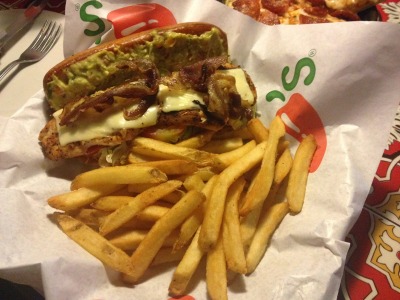 The food as Chili’s looks as unassuming as its entrance, some of it served in “baskets” in a very informal and casual manner, which is by no means a negative and in tune with the entire theme of the restaurant. In fact it eases the tension of eating at a sit-in restaurant and makes it fun to just dig into it with both hands. My daughter had the child’s menu, which mind you is a bargain, consisting of a Margarita pizza, fries and hot chocolate, each of which she enjoyed. Even the fries were slightly thicker in cut (for some reason in the photograph they don’t look as thick as they were) than what is available in most fast food restaurants and thus better in taste. The Margarita pizza, a part of which I too had, looked somewhat unwelcoming, but tasted pretty good owning to the cheese they used. Most Margarita’s lack a certain taste, but the chefs at Chili’s definitely pay attention to the cheese used and the same was evident when I had the Pepperoni pizza which once again had a very distinctive cheese taste and thus proved to be scrumptious.

As I dug into my juicy Santa Fe Sandwich which consisted of “Cajun rubbed chicken breast, cheddar cheese, lettuce, tomato, guacamole, and chipotle aioli in a philly roll” my wife experimented with the Chilis’ Quesadillas, which too was to her satisfaction.

Furthermore the damage to the pocket doesn’t pinch as we managed a stomach-filling meal which included three mains, two non-alcoholic drinks, and a child’s menu for roughly Rs 2000,- I am also happy to say that Chili’s serves its drinks in normal glasses and not in mason jars which seems to be a clichéd trend being adopted by quite a few restaurants.

Chili’s has quite an extensive menu and with big enough servings (we had to get some of our food packed) it is difficult to try more than just a couple of dishes per visit, but what I tasted I enjoyed, thus it should not be long before I visit Chili’s again to experience some of their other offerings.