I’ll be honest – I always am on the blog but just to reiterate the fact – in saying that off late I’ve become wary of small establishments that have cropped up in the hundreds across the city, mainly doing deliveries, having limited seating, with an atmosphere that is claustrophobic, lacking the charm of the small eatery either due to the decor or the gloomy feel all around.

One of the reasons for my cautiousness is that over the last few months I’ve tried such places both by visiting some and others by ordering from, and in almost all the cases I was greatly disappointed. The food was below average and their “high” ratings on various food applications baffled me.

Sometimes though it’s good to throw caution to the wind, or as the kids these days are saying “YOLO”, and just go with the flow – my attempt to have as many clichéd idioms in a sentence as possible. Still, had it not been for an event organised by DRAG (read about them at the end of the review, and no it’s not a smokers club) there’s a good chance I would never have heard of, let alone visited, Biryani Art. Situated at Supermart I in DLF IV, Gurgaon – another one of those small commercial complexes that have quite a few tiny restaurants – Biryani Art is simple with its decor – about five average sized posters on a wall – and the seating that would come across as drab for many, but off late I prefer the traditional old fashioned tables and chairs as compared to the more chic and often uncomfortable ones. Because this was an organised event, the service was good, but the staff seemed happy and eager so I’m sure it’s the same on other days as well.

The restaurant celebrates Hyderabadi Cuisine, and thus the aim of this dinner was to taste their name sake, that is the Biryani. I can’t vouch for their authenticity but as informed the meat is prepared and cooked along with the rice. The set menu for the evening consisted of a few starters, Biryani in its three avatars, and a couple of sweet options to end the meal.

Although I am on a mission to slowly turn vegetarian, I did slip up this one time and tried everything they had to offer. The Mutton Kebab (Gosht Sikhapuri Kebab) was a brilliant way to start the evening. Gently crispy on the outside with a moist and tender inside, these thick discs were wonderfully seasoned with onions and herbs. The kebabs were followed by two spicier vegetarian options; Chilli Mushroom and Paneer 65. Normally I’m highly critical of most mushroom dishes because many get them wrong, but whether it was the excessive chillies or the chewiness of the mushroom making it more like chicken in texture, flavour wise it wasn’t a bad dish. Similarly, the Paneer 65 had a much subtle red-chilli flavour and hotness levels were well within range for me, but both these options resulted in making my palate appreciate the Hyderabadi Lollipop (Chicken) a lot less. The crispness on the chicken was lovely, but had it been cooked just a little longer – short of being burnt – the smokiness of it would have worked wonders. Nevertheless, with my mouth still burning, I needed a bit of water to get my taste buds functioning again.

I won’t beat around the bush and say that the biryani was certainly worth the visit to Biryani Art. The Mutton Biryani had a gorgeous fragrance to it and even though the mutton could have been cooked longer, the flavours were robust. For me though the Chicken Biryani was the dish of the day (I didn’t get around to trying the vegetarian one). It lacked the fragrance of the Mutton Biryani but the long grained thin rice cooked beautifully and the chicken falling off the bone was perfect. Furthermore, the marvelously spiced chicken pieces in-between the lightly flavoured rice and the addition of some Mirchi ka Salan and Raita – served on the side – resulted in a perfect bite when one combined all of them together.

Yes, for once I’m glad that I decided to eat at Biryani Art ignoring my guardedness about such places. The Biryani was certainly good and I think it does justice to their name. While I still haven’t tasted much from the rest of the menu, their biryani is reason enough to eat here. 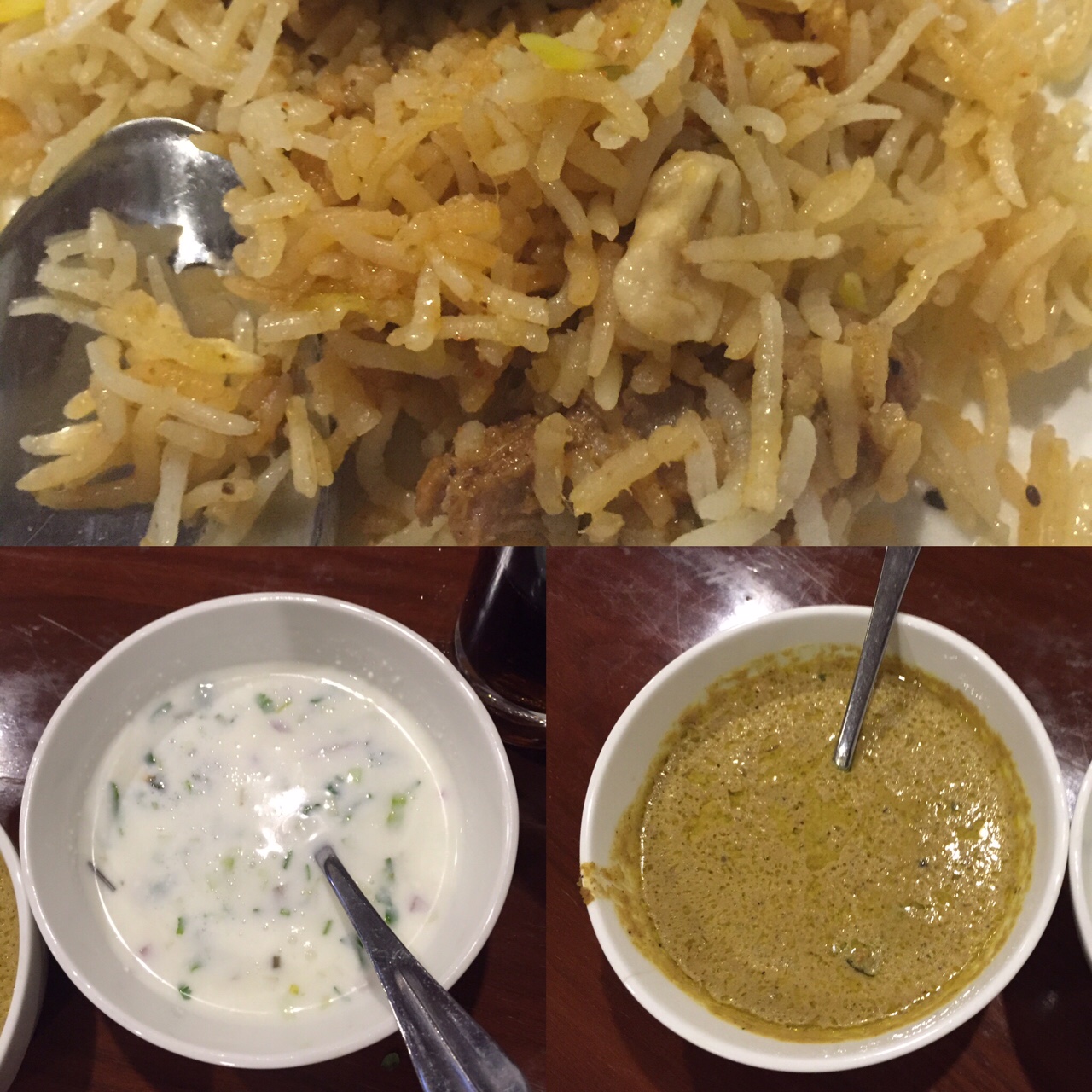 There was a late appetiser that circulated the table – an Indian version of Scotch Eggs – which consisted of a mutton keema paste covering a full boiled egg (Mutton Egg Kebab). Once again the crispness of the outside worked in tandem with the softness of the egg, however were they able to perfect the cooking time so the egg inside is half boiled with a runny yolk, that would make this an appraiser to die for, both visually and in taste. That’s just my suggestion because I’d still definitely recommended it in its present state.

The desserts consisted of vanilla ice-cream – classic and acceptable after such a varied meal – and Double Ka Meetha which is sweet bread for those that have a sweet tooth. While Double ka Meetha has a devilishly sugary name – enough to send a person with diabetes into panic – the bread itself was not too sweet – something I preferred – but its thickness is a little questionable as it could have been thinner.

Places like Biryani Art are started by individuals who have good intentions and in most cases a passion for cooking good food. Even though the dishes we had were a little all over the place – in terms of origins – they somehow worked in the end – which could also be because being in a group it’s easy to be lenient about such things.

So, while it is equally important for food lovers to experiment with “smaller” restaurants, especially since they don’t have the same advertising and promotional opportunities as the bigger places, my only word of caution to Biryani Art would be to keep up with the food and taste standards – both are very different aspects – that they already have and if possible streamline the menu so maximum focus and attention can be given to the essential dishes. For now, I’m happy to say that Biryani Art is definitely a hidden foodie gem of the city, so go ahead and give it a try.

Disclaimer: DRAG (Dhaba & Restaurant Addicts of Gurgaon) is a Gurgaon based organisation that encourages its members to experience various restaurants and dhabas around the city by having events ever so often. I went to Biryani Art as part of the event. While there was a set menu, it was a paid event. However, as always, the organisers received a group discount which was passed on to everyone present. This review has been written on my own accord.