Laxmi Mishthan Bhandar – Eating in the Past

Why feel nostalgia when you can actually live it.

Laxmi Mishthan Bhandar, or LMB as it is popularly known, in the heart of Jaipur, is a place where time has stood still for decades, and yet it remains one of the most iconic and cherished places to eat inside the walls of the pink city.

A two-day work trip had taken me and my father to Jaipur and while I searched on the web, prior to our departure, for places to eat, he announced – as he normally does – that we shall be eating at Laxmi Mishthan Bhandar. He had eaten there close to three decades ago and had fond memories of the place. Wanting to relive that memory, all other possible options were authoritatively discarded. On a normal day, my father is wary of travelling through crowded small lanes, but even though LMB is situated in one of the busiest parts of the city, he remained adamant. His mind didn’t change when en route we got lost in the by-lanes or when we had to take a long circular way to get back on the right track. There was no changing our destiny.

An hour and a half later I walked out of LMB with a smile on my face and a tummy so full that once I hit the bed that late afternoon, I did not get out of it till the very next morning.

LMB has been in the food business since 1727 and are proud “Halwaies”. In a country where everyone is claiming to be a pub, a brewery, a restaurant, or something Western on those lines, they have remained as local and as regional as one can get.

Cramped between pink buildings, easy to miss if you are not searching for it, the smell of oil hits you the moment you enter through their main door which comprises of the “fast food” or Halwai section. On one corner, another door, manned by a guard, lets you into the main restaurant.

It’s a room that has seen it all. The walls, even though re-painted over the years with a more “modern”decor, are worn down from hearing decades of secrets, hush romantic whispers, gossip, longing conversational silences, and the most mundane of discussions.

On the afternoon we visited, it was full; a table occupied by foreign visitors with a worn down Lonely Planet safely tucked in one hand, a group of young girls had taken over a large table and seemed to be enjoying a reunion of sorts. There were a few business deals happening around and in another corner, a large group was concluding what had been a loud and cheerful kitty party.

And then there was the occasional first timer – very much like us – who had wondered in wanting to taste the traditional Rajasthani food, having read about the establishment most probably by word of mouth or as in the case of my father, simply reliving the long not-so-forgotten past.

The staff at LMB is quintessential old-fashioned, the type that adds to the scene and without whom the legend would eventually die down. Their faces and the ease with which they move around the room proof of the fact that they’ve worked here for decades, possibly all their lives. They approach with an almost sixth sense of knowing the guest and whether he/she needs just the menu or a detailed explanation of what they serve – a hint towards the international clientele they obviously get.

The menu has all the classics under heads like “Mem sahib ki pasand” and “Dakshin Bharat Se”, but if visiting for the first time, it’s recommended you go with their specialty, the Rajasthani Thali. 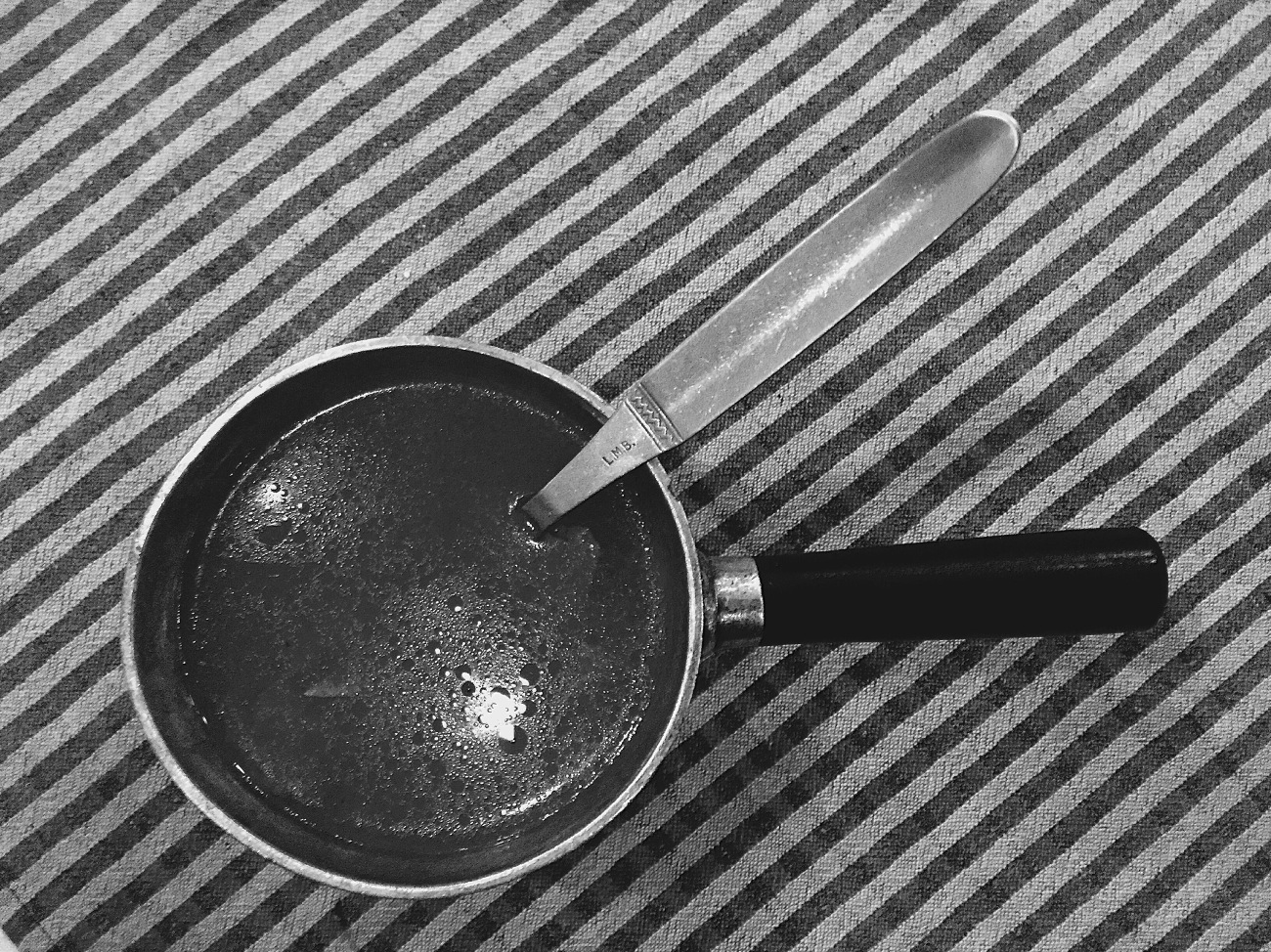 The Thali “commences” with a very unique looking bowl of Papad Mangori – Paprika flavored clear lentil ball – soup that is so spicy yet so tasty that I couldn’t give a damn about my burning mouth as I cleaned the bowl up in minutes.

The actual Thali, when it arrives, is too big for the table. Having ordered two meant there was hardly enough space left – millennials would freak out considering they are so old fashioned they obviously don’t even have space for mobile phones. The thali does have a grand feel to it, with enough space to mix up the ingredients as they should be.

The diameter of the thali aside, I must at this point caution you for at first glance the quantities seem insufficient – especially if you are as hungry as we were – but it was probably the heaviest meal – think two elephants heavy – I’ve ever had in my life. 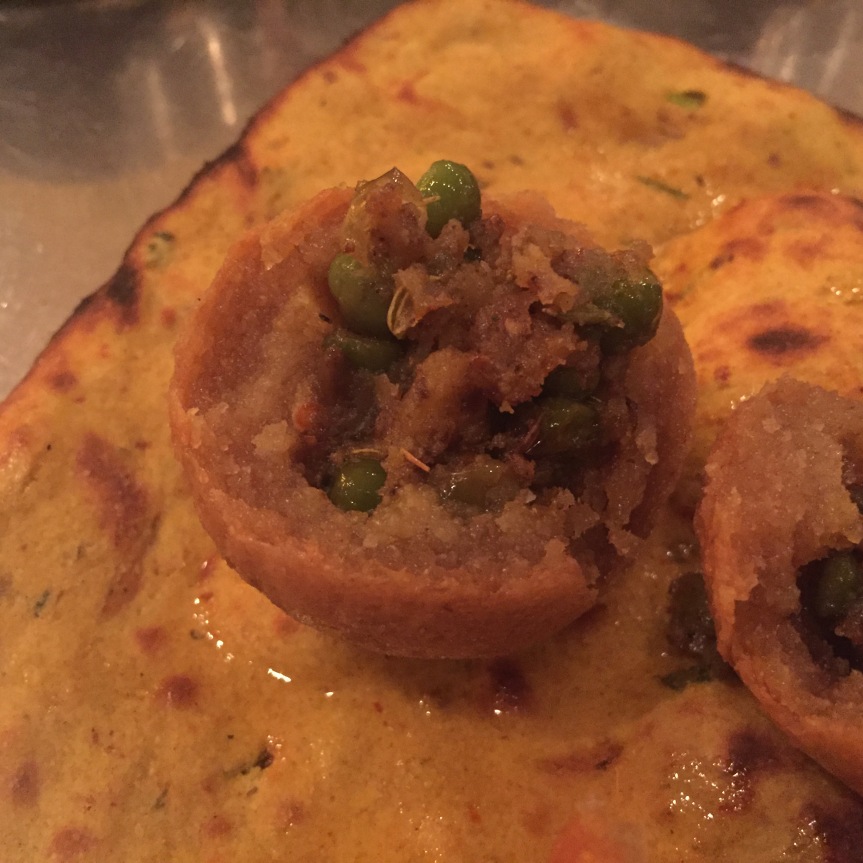 The Churma and Bati is tradition Rajasthani food made with flour which is then cooked in a charcoal oven and served dipped in ghee and jaggery on the side. Available in different flavours, its small size is contradictory to how large an effect it has on your tummy once you consumed it.

The Dal, Bela Rajasthani, Kadi are all traditionally prepared adding to the colourful heritage of the region that the thali is supposed to spotlight. The Kair Sangri which is a dessert vegetable cooked with caper beans is a favourite. Roti, raita, and a few small bowls of this and that make the Rajasthani Thali at LMB one of the Must Have food dishes in the city of Jaipur, especially if you want to get an introductory taste of the local cuisine.

Outside the sit-down restaurant is the Halwai section – one we initially crossed – which oozes even more old-world charm.

The cashier sits cross legged on a Gadda (mattress) behind the counter with a large iron box where the staff comes and deposits money and takes the change. There’s nothing electronic in sight. It’s free for all at first glance but obviously, there’s trust that runs deep between those that own and those that run the place.

Gods and Goddesses grace the wall behind the cashier in all their colourful glory. Display cases stacked up with boxes on the sides lure the customer into buying that one more thing. The counter is no less, with knick-knacks, sweet and savoury, assembled in lines to entice the unassuming customer into picking up another local delicacy. It’s simple in-your-face marketing the old way. 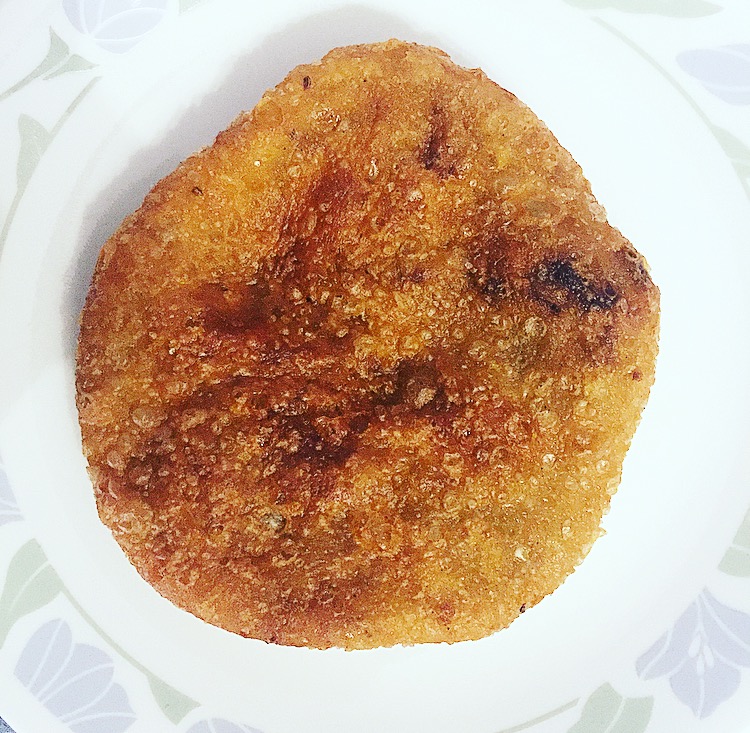 Homeward bound, we picked up boxes of Ghewar – a disc shaped aerated cake like sweet made with flour and sugar – to take back along with another specialty of LMB, Pyaz ki Kachori. Often had at breakfast, lunch, or with evening tea, the Kachori at LMB is by far one of the most delicious ones available – not too spicy and full of taste. A kachori has the versatility to go with a chola, dal, Kadi, or as most have it, on its own and the LMB ki Kachori is as celebrated as the restaurant.

In a world where the glitzy interiors of restaurants shine bright in our eyes and liquid nitrogen smoke up rooms in amazement, LMB is an establishment that has stayed the same over centuries, celebrating food in its authentic form, as it continues to provide the kind of “those good ol’ days” charm that is so hard to find in this day and age.