There’s always someone running at the station.

As I sat down on an empty orange bench, late one night at Platform 16 of New Delhi Railway Station, a different world emerged in front of my eyes.

A world where there was no cast or creed. People moved together, to and from, in and out, with only a destination in mind. They come from diverse strata of life, from different states of the country, regions of the world, in all shapes and sizes, just like the bags, backpacks, and suitcases that they carried with them.

No one judges people here. There’s no time for that. No one looks at your shoes, bothers about your clothes, or what watch you are wearing, because there’s a train to catch, an onward journey to embark on.

There’s always a rush… everyone is moving… running.

Early to pick my daughter, who was returning from a school camp, I settled down comfortably in one corner. A train stood at the platform, ready to leave in a few minutes. The space around me lay empty. The odd Coolie (luggage carriers) would pass by occasionally, in their trademark red shirts, an attire that for me was made iconic by the Amitabh Bachchan film of the same name.

The weariness of the day was evident on the faces of the coolies. It seemed like a slow night for them. As I had entered the parking lot a while back, a few of them rushed over in the hope that I was a customer. The disappointment on their faces when that was not to be could break many-a-hearts. On realizing I had no luggage to carry, they returned to their spot, squatting on a road-divider in one corner of the parking lot, under the bright beams of the street light. 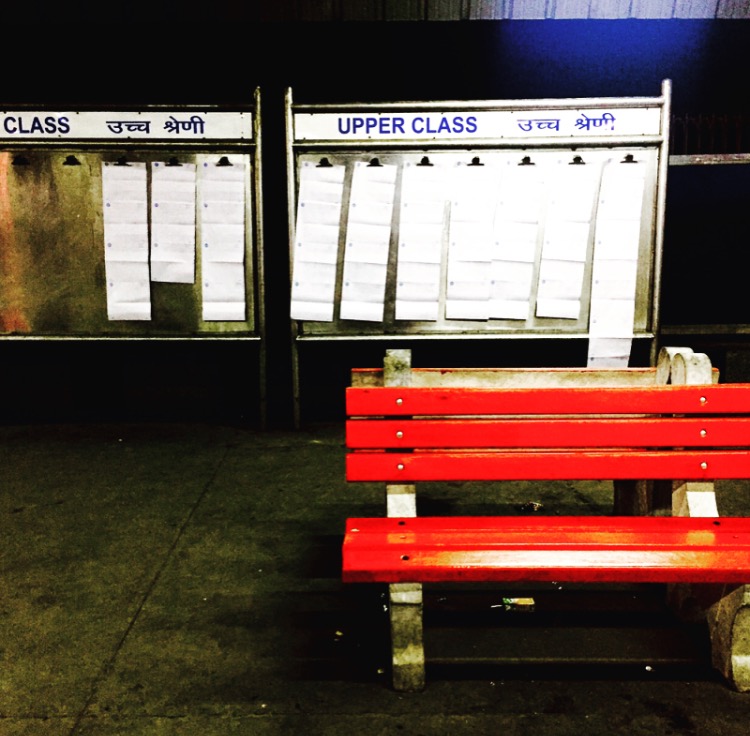 I sat on the bench thinking if I should walk up to them, as they gathered together exchanging life problems most probably, to take a photo. In my mind I had the perfect frame. I continued to sit on the bench.

And then came the train announcements, breaking the silence that had descended, loud on the speakers across the train station, infringing upon my moment of introspection. The announcer, a man, had a surprisingly clear voice, yet he spoke with so much rapidity that if I were not to pay attention, nothing would make sense.

These constant updates and announcements soon transformed into a unique sing-song; a train arriving on platform 2, another about to leave platform 7, names of trains that highlighted the diversity of our country, and number spoken out one after another interrupted by the collective sighs when a train was announced as being delayed, and the panic if one was cancelled. It was like background music to everyone’s life at that very moment on Platform 16 of New Delhi Railway Station.

Whenever the announcements would stop, an eerie stillness would envelope the station that made each reaming sound that followed stand out. A hearty laugh of a woman in the distance, a boy troubling his mother to let him buy sweets, or a BANG! – Luggage falling down – that made everyone jump with nervousness.

Parents began to arrive around then. Obligatory greetings exchanged it was different seeing them today. During school functions, everyone dresses to impress, but here, today, the fatigue of the day gone by had made them come in casuals – unkempt hair, chappals, and comfortable clothes. Some though had made an extra effort – even though it didn’t matter – as they probably knew that this was the place – as unusual as it may have seemed – to be seen. We all are human after all.

Finally the train leaves. It’s surprisingly soothing to watch it clatter along on the tracks at a leisurely pace. A few men hang by the door, another runs to jump in at the last second. No dramatic scenes like the ones we grew up watching in Dilwale Dulhaniya Lejange.

The scene at the platform changes drastically sometime in-between the train leaves and the next one – the one I’m waiting for – arrives. The space abruptly comes alive with activity and sounds merge together to form a tune of a different kind – imagine a thousand euphonious bees buzzing in your ears.

Once again there is movement all around, as if the cups of tea that many had had while waiting are finally taking effect. This wait for the train is full of anticipation and longing. People will occasionally stand on their toes and stretch to see in the distant darkness for the high beams of the train.

A sudden flutter, almost comic in nature, whenever anyone would shout “Aagayi (it has come)” would die instantly as the oncoming train would turn, at the last minute, only to arrive at a different platform.

As time goes on restlessness stars to creep up, patience begins to be tested, constant checking of watches all around, smiles turning to frowns. The sounds that till now were melodious become noise; a child howling because she’s misplaced her parents momentarily, a mother with tears in her eyes, speaks in a high pitched voice to her son who is leaving for college, the over-enthusiastic chatter between a group of young students ready for what seems like an adventurous trip they will cherish for the rest of their lives. It’s all here, in this confined space of the platform, and at this late hour, it irritates.

I, along with a parent, move to one side and visit a bookshop. You’ll find them, some small, some big, on most important stations across the system. There, among stacks of bestsellers are some “railway classics” like Surendar Mohan Pathak, Champak, and many a cult magazines that report murder, mystery, and the supernatural albeit in a non-fictional setting – whether you believe these sensational stories or not is completely up to you.

Then it happens. There’s delicate commotion among the small groups that have formed across the platform. The train is finally here, a mere 30 minutes late.

The train’s arrival brings a different kind of energy with it.

Those on the platform, who had by now settled into a lethargic slumber, come alive, looking, some talking on their mobiles, others searching the old fashioned way – running along the train peeking inside carriages – for loved ones or acquaintances.

Standing put as the world around me moves; it’s satisfying to witness the relief of reaching the destination, apparent on the faces of those that have just arrived. On the platform, another drama unfolds. The longing of letting go that clouded the platform a while back is replaced with a rain of excitement; stolen looks between lovers, hugs all around between parents and children, many adults greeting their elders by touching their feet, there’s merriment all around.

However, that sense of hurry still looms in the air. There’s that rush again. This time people are running to leave, to beat the traffic, to finally reach home. 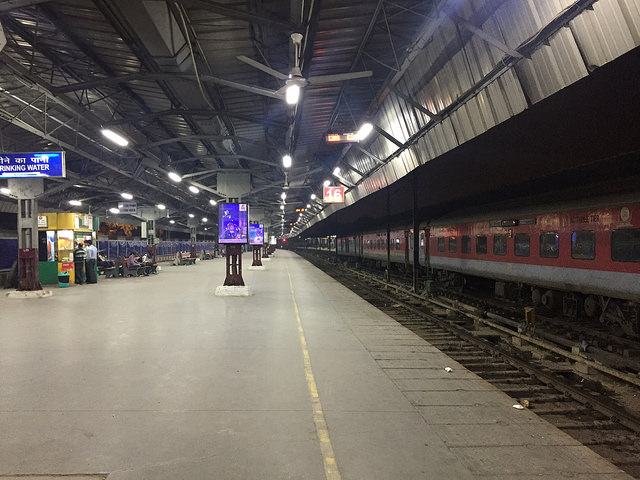 Life at a train station, especially in a country like India, is unique. Moving from region to region you are more than likely to find slight changes but the heart and soul of the railway system remains the same throughout the length and breadth of this nation.

Many commonly quote that it is not the destination that matters but the journey. Sometimes though, experiencing the destination, even if it’s just a railway platform, is an affair that lingers in the mind for a lot longer. Leave a Reply to Ticker Eats The World Cancel reply