2 Days in Zagreb – A Memorable and Soulful Journey 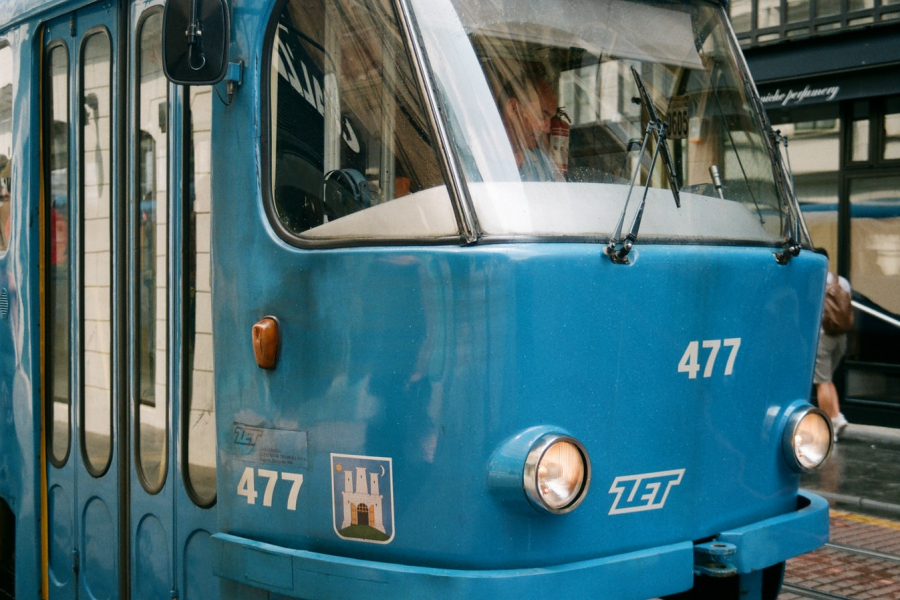 While architecture adds an aesthetic value to a place, its people add a humane touch that aids in appreciating its true essence. In that context, the Zagrepčani (Zagreb Inhabitants) are an embodiment of the city’s history and culture.

A relatively young country, Croatia, and in particular, Zagreb, traces its roots back to the Austro-Hungarian Empire. The remnants of this past can still be found scattered around the city. The vestiges of Yugoslavia, however, are deeply rooted in people’s memories.

The central train station itself is an aide-mémoire of the Soviet connection with a few Soviet-era locomotives still plying for shorter journeys.

The fragments of Soviet history were even more evident as I made a backdoor entry into the city on a summery June morning via one of the suburban trains. It took me to the stop closest to my hostel, which I had booked for my two days in Zagreb. 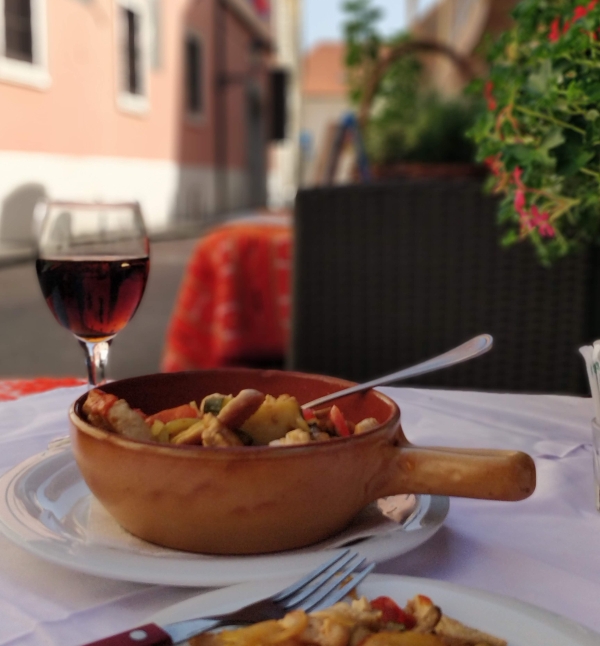 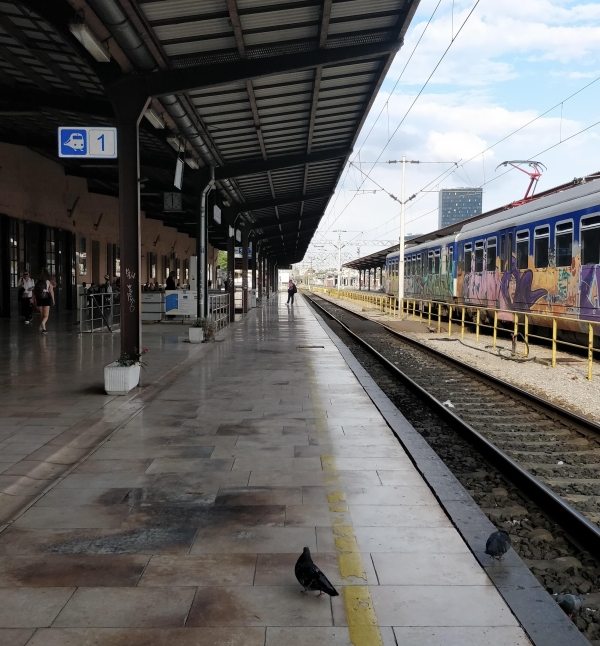 Given the hedonistic image of hostels I had in my mind, choosing the right one was a task. Hostel Mali Mrak, a sequestered spot in a residential suburb, turned out to be an unexpectedly comforting nest.

Unlike the party hostels found at every corner of the old city, this one with its quaint beer garden-cum-reading space, unpretentious setting, and warm hosts made my first ever hostel experience truly memorable.

It is also a place where people made all the difference, making it one of the best places to stay in Zagreb. The hosts welcomed me with warmth and over a strong cup of coffee, revealed some secret spots in Zagreb that only the locals know about.

So, early that afternoon, armed with a very creative and intelligible map of Zagreb, provided by my hosts, I set out to explore the capital of Croatia. 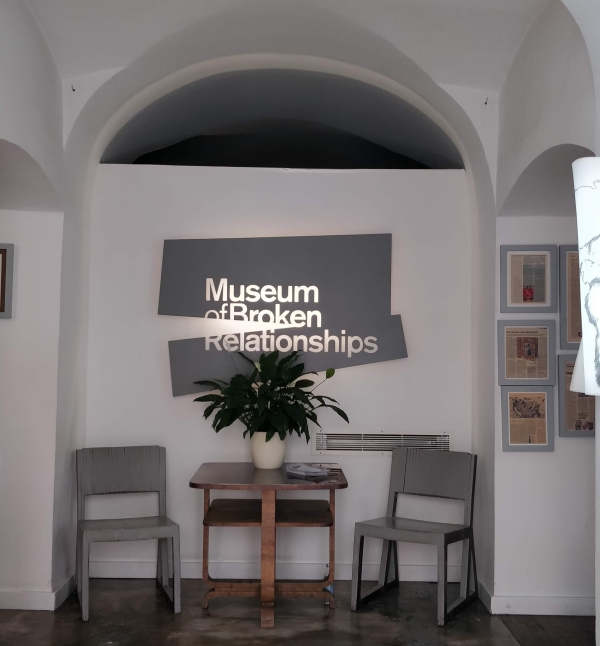 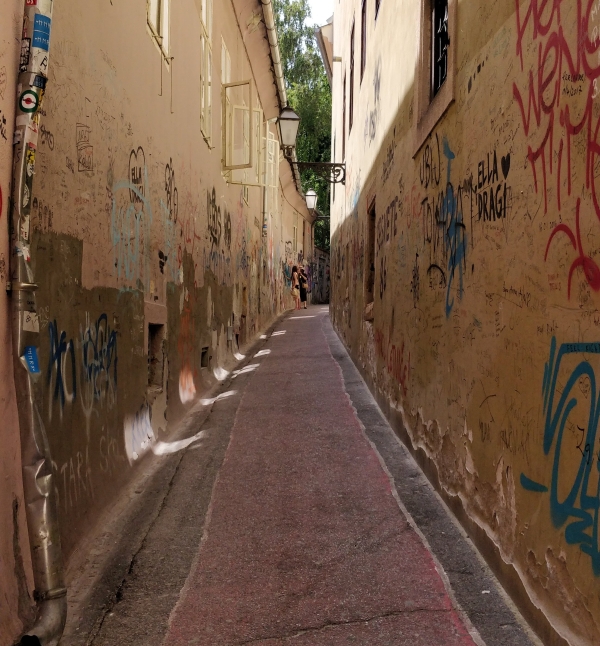 Although my idea of travel is always to dig out hidden gems, sometimes popular quirky spots grab my attention. The Museum of Broken Relationships was one that had intrigued me ever since I came across an article sometime back. It was, therefore, my first stop in Zagreb.

Nestled in a baroque palace in the historical Upper Town (Gornji Grad), the exhibits here are a reminder of the fragility of human emotions and our attachment to material things.

Some of the stories might take you back to your heartbreak, and if you are the lucky few who are yet to experience this, it will validate the evanescent nature of relationships. In either case, you will leave dewy-eyed but a little more appreciative of your present. 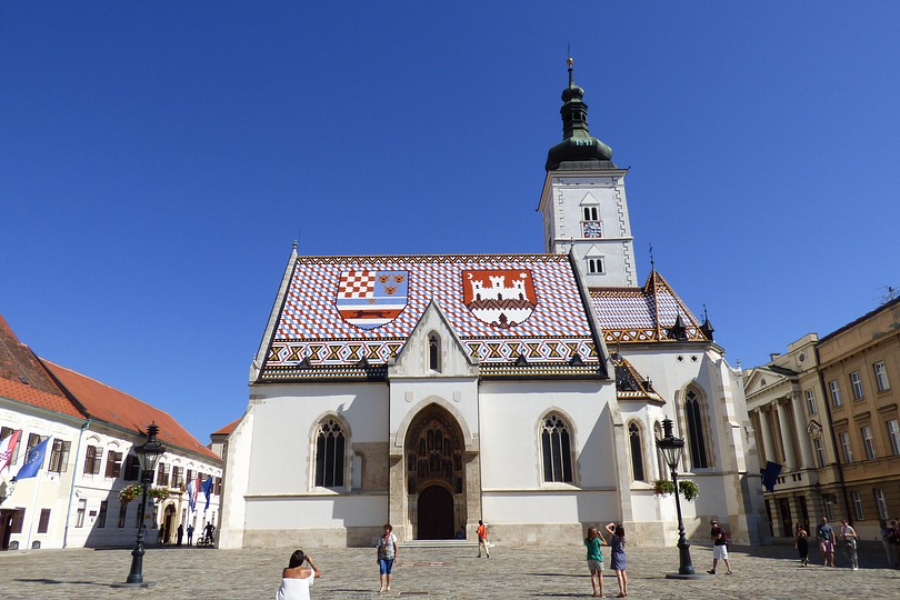 After this emotional visit, I preferred to take in the sights in the Upper Town. I started with a short stop at St. Mark’s Church in Kaptol Square.

With brightly colored tiles on the roof bearing the coats of arms of Croatia, Dalmatia, Slavonia, and Zagreb city, it is an icon of the city’s autocratic past. During weekends it is also a place where changing of the guard’s ceremony takes place.

After refueling at the Konoba Didov San with a generous portion of fried chicken and potatoes accompanied by a glass of wine, I was ready to explore the historic Upper Town further. 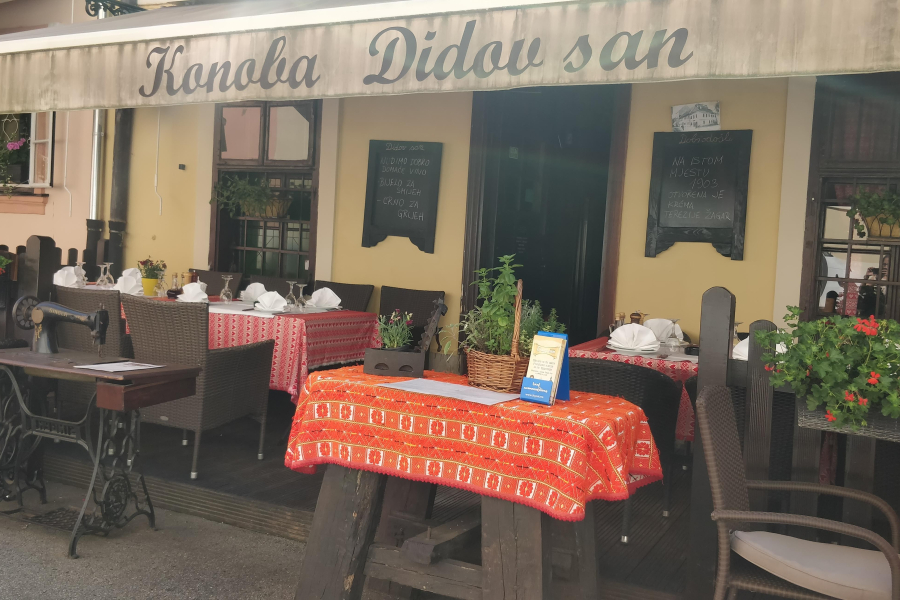 The next stop was the 13th-century Lotrscak Tower. Apart from being a beautiful piece of architecture, it is a perfect vantage point affording panoramic views of Zagreb.

Today, a cannon is fired from its roof every-day at noon to continue a medieval tradition of warning the inhabitants of the closing of the gates. However, it is merely a symbolic act.

Another medieval remnant with a more visual appeal is the Stone Gate (Kamenita Vrata), one of the only surviving gates of the city. It houses a shrine of Mother of God around a painting from the time the gate was originally built in the 13th century.

A fascinating museum for the artistically inclined is the Croatian Museum of Naïve Art. A local art form, popular in the 1960s & 70s, its fame has declined over the years. The museum remains one of the few repositories of the colorful and dreamlike works within the genre.

I ended the day strolling through the Dolac Market, picking up some fresh fruits, including some of the juiciest strawberries I have eaten and cheese for the next day’s breakfast. I hit the bed exhausted, satiated with my day’s explorations. 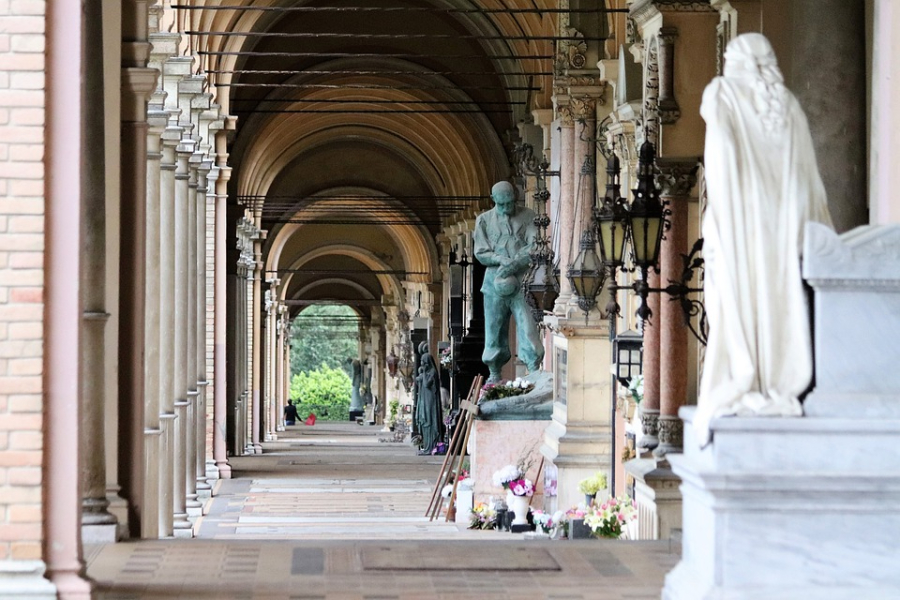 My last day in Zagreb began with a visit to the Mirogoj Cemetery, another poignant symbol of the transient nature of life. The grand Gothic portico leads into a vast tranquil tree-lined space, interspersed with impressive tombstones, tiled arcades that stretch into infinity, and pastel-colored domes akin to a Cathedral’s. Over 300,000 souls rest here, from poets to presidents to football legends.

Given the sheer scale of the exhibits here, it can take you days to cover everything. So, if pressed with limited time, choose wisely!

After grabbing a quick bite of a traditional Mediterranean pastry called Borek near the main square (Trg Bana Jelacica), I hopped onto the shortest funicular in the world, used as a public transport! Only 66-meters long, the Zagreb Funicular connects the Lower with the Upper Town. 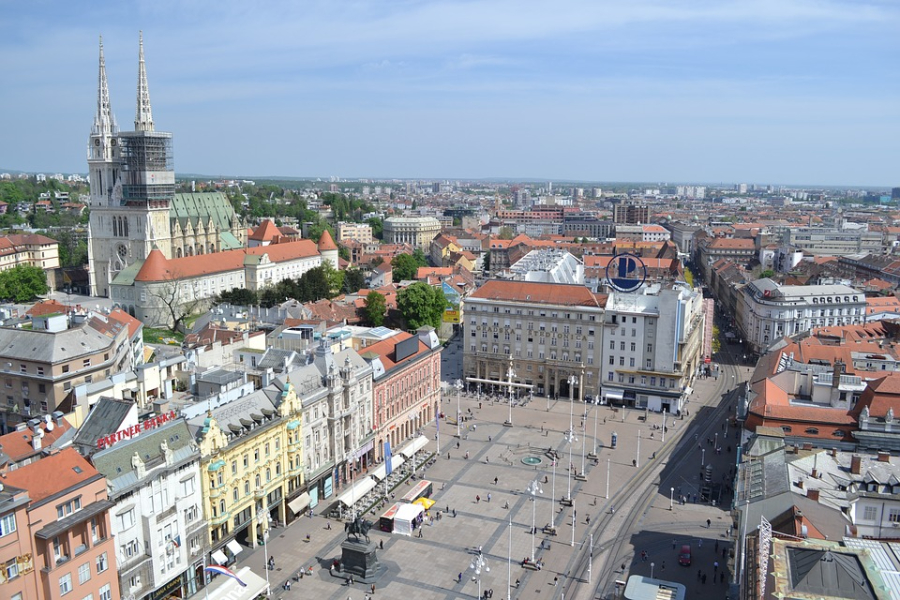 After this joyride, I headed to the Zagreb Cathedral (Upper Town) that dates back to the 13th century, though transformed many times over. The two spires are an architectural masterpiece that complements the neo-Gothic structure.

Sitting outside, devouring my cone of ice-cream (which, by the way, is a must to beat the summer heat in Zagreb), I watched in awe as the light of the setting sun bathed the cathedral in a golden hue, augmenting its sanctity.

I choose the Grič Tunnel for my final trip down from the upper town to the main square out of sheer curiosity. A former WWII air-raid shelter, the eerie walk through the 350-m long tunnel reminded of the horrors of war that Zagreb’s people suffered less than 30-years ago!

Much like the city of Zagreb, the mystery-laden tunnel is headed for a transformation as an art and cultural space. The locals hope that this will heal the wounds of a traumatic past. 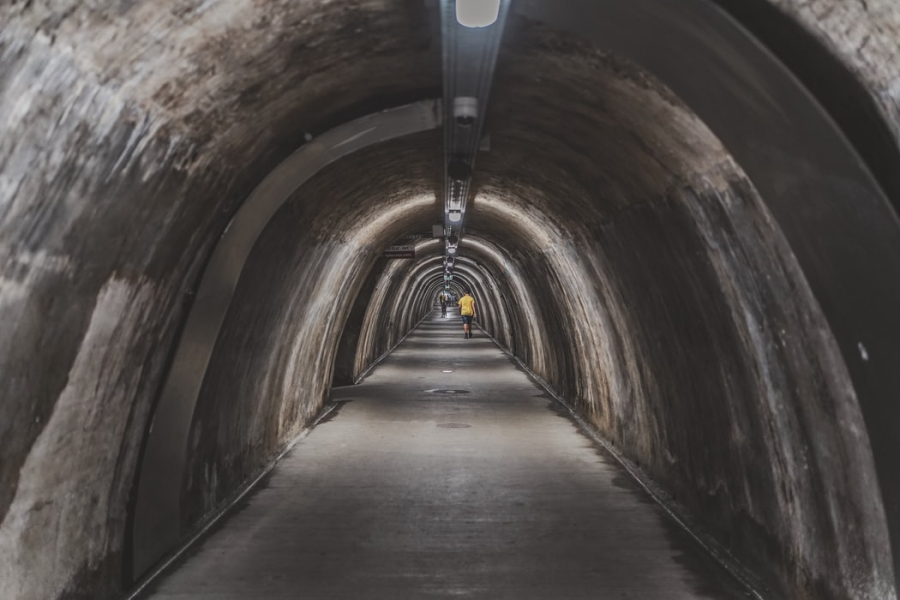